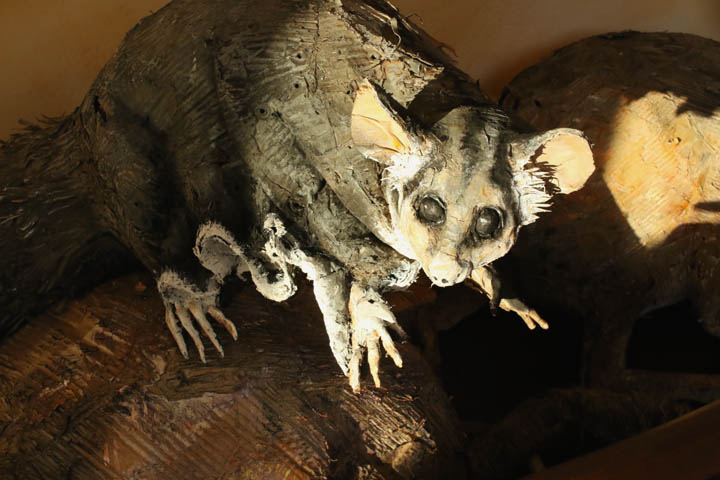 This sculpture will be part of the upcoming Nathalia Vic G.R.A.I.N.Store community exhibition. I use used cardboard, as thrown out in huge quantities at the rear of retail premises, notice the ‘log’ the flying marsupial is standing on. The sheer quantity cardboard produced  and destined for packaging ‘products’ is staggering, we are destroying the places gliders live to make paper and cardboard.

This is the last of three posts which describes the process I use, and looks at painting the surface. Go to side menu to see previous posts for construction stage.

Painting begins by filling in darks, these are usually crevices and concave surfaces. Paint the darks into ‘fur’ (tail) and fur folds (front of back leg etc. Be bold and ignore areas which are to be light or white.

White gesso is underpainted on areas which are to be light and mid-tone areas are left bare entirely of paint.

Colour is now applied to whites where required, and lighter highlights added to mid-tone areas and dark areas. 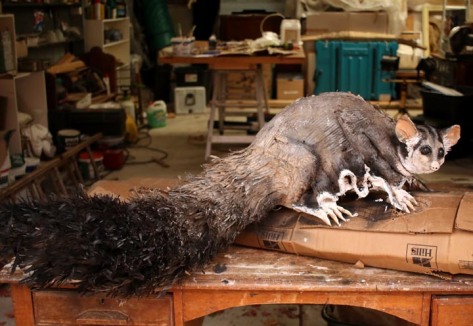 This is a studio shot of the ‘just-finished-painted’ marsupial glider.

Details about this upcoming exhibition will be posted at https://www.facebook.com/The-GRAIN-Store-Nathalia-125682797583711/?fref=nf

The G.R.A.I.N. Store exhibition in Nathalia will be opened Sunday June 19th, 2016 4pm by John Kean curator and writer. He is an Honorary Associate of the Museum Victoria, where he was a producer of exhibitions and other projects for fifteen years. Kean has written extensively about the representation of nature in Australian museums. He has also published extensively on Indigenous art and was Art Advisor at Papunya Tula Artists in the late 1970s.
https://www.australianbookreview.com.au/about/author/1170-johnkean

One thought on “Squirrel Glider ready to fly..”