My arts project ‘Departure Lounge’ documents Australian mammals which are on a path to extinction, and attempts to encourage some understanding of species loss with a connection to the consumer culture we are all part of. Most works are 1.2meters in length. Works from this project won the 2014 Toyota Sculpture Prize in Melbourne. Here’s a few photos.

Numbat (Myrmecobius fasciatus) were once seen over much of southern Australia but are now listed as vulnerable. There are less than 1000 individuals remaining including those captive bred. Numbats eat only termites but are not strong enough to break into nests and must feed when the insects are active just below the soil surface.

Australia had four species, one is now extinct, one is critically endangered, another is endangered and the last is listed as vulnerable. Populations have declined since European settlement; predation by the red fox and domestic cat, as well as the loss of suitable habitat for agriculture, are the main causes of these declines. Populations tend to be at higher levels in Tasmania due to the historic absence of foxes. 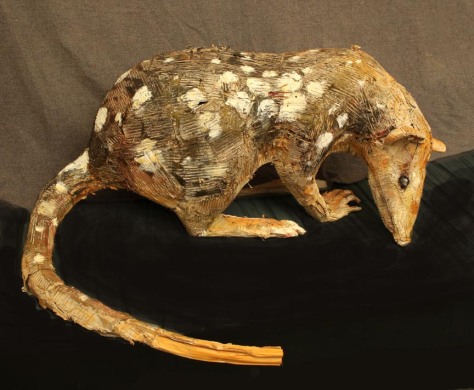 Quoll (Dasyurus)Australia has four carnivorous quoll species, the smaller Northern hallucatus, the Eastern viverrinus, the Western geoffroii and the larger Spot-tailed or tiger maculatus represented here. There is also an isolated sub-species gracilis in far Nth Qld. All are listed as Vulnerable on the mainland.

Introduced predator threats: the  number of feral cats and foxes stalking Australia  is unknown, but scientists tell us they are decimating what is left of our small terrestrial mammals. Cats can survive on prey fluids alone, able to live where there is no water, that’s most of Australia. 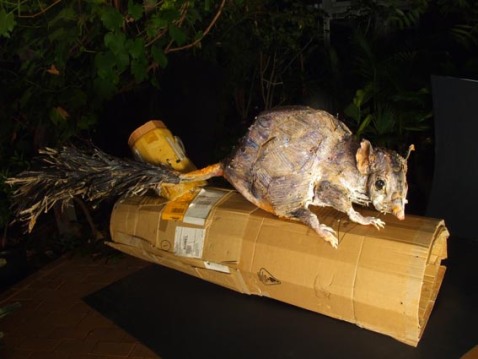 Numbats, bilbies, tuans, quolls, bettongs, bandicoots, mulgara, small wallabies,  pigmy possums and many native rodents like our stick-nest rat are unique to Australia but unknown to most people.

Fenced feral proof sanctuaries and tiny off-shore islands are the only safe habitat for many species , however given a chance many will thrive in the harshest of climates often without water and with little to eat. Through their digging and burrowing they are the perfect Aussie arid land farmers. They continuously sow seed out of wind and baking sun where water and organic matter can collect.  As fungi hunters they spread mycorrhizal fungi to roots enabling increased access by plants to nutrients and water. They do this 24/7 in places we humans find unbearable.

Images from this project was screened at the Ecological Society Conference in Adelaide in November and December 2015, https://www.ecolsoc.org.au/conferences/esa-2015-annual-conference

Studio shot May 2016, Squirrel Glider  (Petaurus norfolcensis) is a nocturnal gliding marsupial. Australia has 7 listed species, but we may have one not yet described but funding has been available to do this work and shows just what is considered important in this country. We could be easily losing a Glider species which we didn’t know we have.