I don’t see myself as a photographer, but as a follow up to my Warru experience I have decided to post photos of species I observed and recorded to the Atlas of Living Australia  http://www.ala.org.au/

Not a Murray cod but very large…..you guess 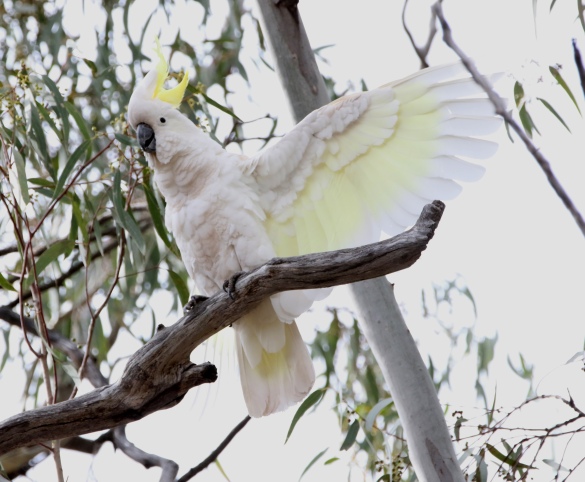 Little corella, thousands of these on the return trip following the wheat harvest

Weebill, not sure which one

Hattah lakes is a favourite over night stop heading north, its amazing what can be seen in an hour or two. Next camp is in South Australia, back soon with another batch of photos.

I first had to learn how to identify warru from euro scat, then learn to climb the rocky summits with a heavy lensed camera in one hand. 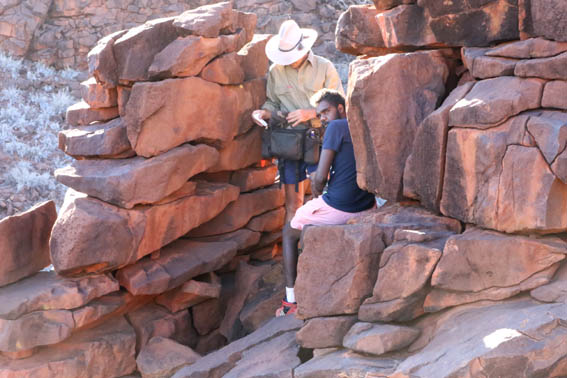 The Musgrave Range appears as a series of rock outcrops studded into an enormous plain, the sense of timelessness is overwhelming. We were climbing the ancient bones of an even more ancient mountain range. 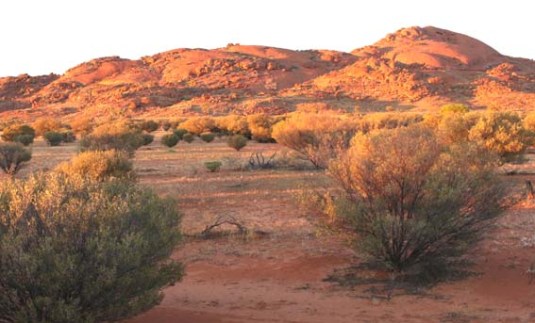 I was glad I wasn’t there by myself. Climb one peak and there’s another the same behind and another in the distance. Get lost here and whiteboy is cactus.

But to the people who live here it’s their backyard. Climb into the Toyota they’ll take you around any of the Musgrave features. Our last scat count took us to the West Australian border and spitting distance to the Northern Territory.

Try gowing your veges in this….

Warru live in rock crevices away from plains predators such as cats. Try climbing this on a cool 36 degree day!  Understanding and documenting Petrogale lateralis is not for the faint hearted. 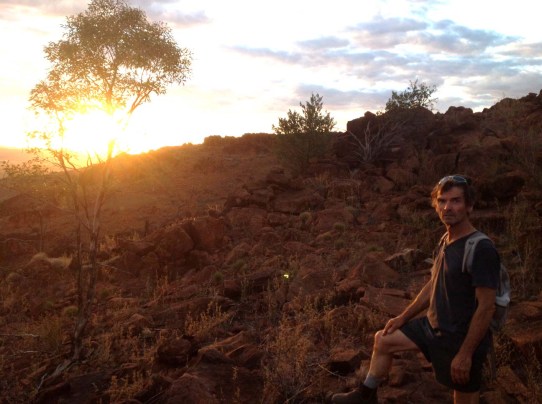 Me with daypack & enthusiasm, but not much breath

John and Matthew exchanging notes…I’ve no idea what about

Jacob takes a picture with West Australia as a background.

Thanks to the people of APY who kindly allowed me to see their country first hand, also to John Read my host. Helen, Jacob and Matthew at Kalka I will definitely not forget, and a special thanks.

Who after watching this could  feel grumpy about a few apples or quinces? How lucky we are to have this beautiful animal adapting its former forest behaviour to live with us. Here I am in the middle of a city of 3 million people and ringtails arrive on the dot of 11pm ready to party.  They sleep by day in nests they’ve made around the neighbourhood, eat their own poo (special daytime poo which they need to digest their food) lick their paws, yuk!(two digits forward, two digits behind). Then shove the kids in the pouch if tiny or sling the whole family on the back and told to hang on tight.

I was recently requested to submit some images from ‘Departure Lounge” 3D artwork (see Sculpture page on this site)  for screening at the Ecological Society of Australia Annual Conference, which begins Nov 29th.

Here’s the blurb I wrote for the event:

“The sculpture project “Departure lounge” attempts to spotlight marsupial species threatened with extinction due to introduced predator impact and habitat loss, but also references the inherent threat human ‘requirements’ pose to their continued existence. Cardboard packaging used for consumables is employed as my medium, a material sourced from living trees, the home of many species and lungs of our planet”

It’s all still in the planning stage, but if all goes well this will be the first time I have participated in a science event….an artist in a room full of scientists, scary.

Wivenhoe dam in Queensland has a shoreline of many hundreds of kilometers, but it’s clear some birds prefered to remain close to the small camping area. The following shots were taken within and close to designated camping sites. The frogmouths were actually roosting within the smoke zone of camp fires!

Campers were totally unaware of the two birds above their heads 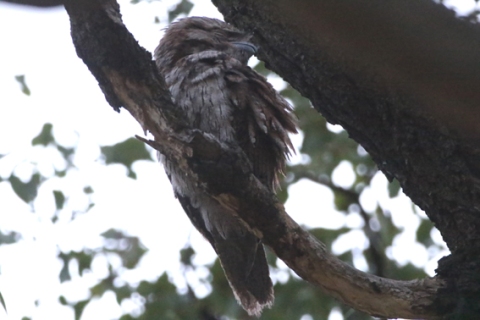 The Brahminy kite was possibly a chick hatched in  a  nest in clear site of human camping visitors. 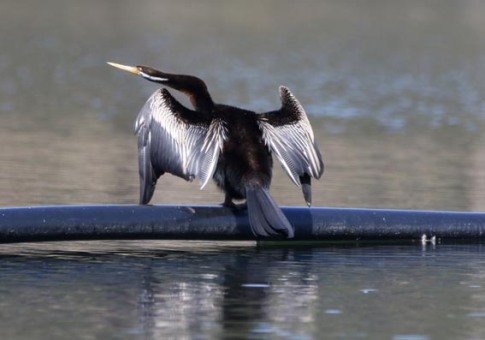 A Darter chose a poly pipe within 30 meters of the camp to dry out and..

a red-backed wren family used nearby reeds and bushes as their chosen home base.

In addition to the above, a flock of many hundreds of black cormorants choose to roost in the trees directly ajacent to the camp-ground. The question is, why do these species choose the camping area given the enormous space available to them at Wivenhoe?

Continuing the question that some unlikely species are finding refuge and food in areas close to human habitation, this post includes photos of a species “choosing?” an unusual site to reside and display. The following photos were taken over the last week in Queensland.

Male satin bowerbird, photographed within 2 meters of a bitumen road. Truck road use started at 7am. The evolutionary process continues…. 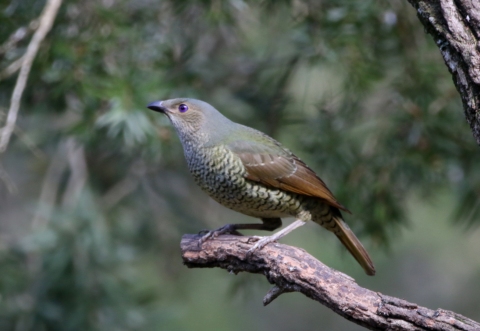 Female of the species enticed by a bower made in a roadside culvert. 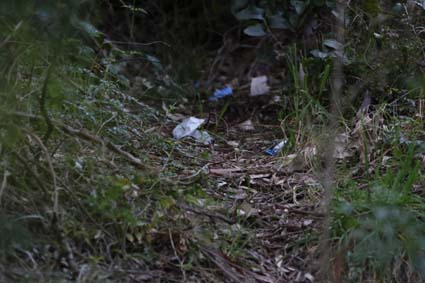 View of the bower which contains mainly blue clothes pegs, I guess the locals learn to use alternative peg colours to hang out washing.

If you know of a researcher who is looking at how some species are choosing living space ajacent to urbanization, please advise by replying in comments or email.

WATCH A BEE SWING BY ITS TEETH

Honeybee numbers have crashed in Europe and America and we do not really know why. Australia’s bees are still ok, probably because we still have a broad range of wild nectar producing plants. Farmers the world over are using herbicides to kill “weeds” which means there are less roadside/cropside meadow-lands. If bees are stressed they die young which stimulate younger bees to forage before they are ready, seehttp://www.smh.com.au/technology/sci-tech/australian-scientists-may-have-solved-the-mystery-of-bee-colony-collapse-20150209-13a6ss   Bees are a main human food crop fertilizing species , and below is a list which rely on bee pollination. If bees go, these go.

Hydromys chrysogaster, also known as rakali and in times past, water-rat. It’s Australia’s beautiful large aquatic rodent with webbed feet,  water-proof fur, white-tipped tail and carnivorous appetite. Studies in Sydney hint that this species is able to defend its territory from introduced vermin i.e. they keep rats and mice at bay and probably predate upon them. Rakali may also live in symbiosis with platypus sharing burrows see:  http://www.platypus.asn.au/the_australian_water_rat.html

As a burrowing mammal rakali are considered pests by some irrigators, but paradoxically they may be a major predator of crayfish and yabbies,  known abundant dam and dyke burrowers.

I recently managed to shoot this video clip with help from friend Ian with boat on the Murray River in Yorta Yorta country. Rakali is very active so I have slowed the speed 50% start and end of clip for ease of viewing.

This winter I have been busily shooting this video…which is really a question I cannot answer. Why do these birds persist occupying this fragment of polluted creek estuary, only 10km from Melbournes’s CBD? Are they attracted in some way to urban space? Is winter warmer in the city? How do they withstand the relentless noise and noxious odours eminating from the refinery, the continual train passage, car traffic and heavy metals in the water, the dogs? Or is this a last refuge for them, a place where they can find food and shelter of sorts? Is there no place else to  go?

I spent a couple of hours today with my camera in the hope of shooting something extra, but the gagging fumes dove me away and I can still taste acrid refinery fumes.

Why is it some native species move to cities with people, rats and sparrows (possums, bats, parakeets and now even powerful owls)? Are our rural landscapes now so unfriendly to wild species? Is”biodiversity” moving to the world of people, or is this just an abboration?

Pink-eared duck Malacorhynchus membranaceus an endemic bird, can be found in anyplace in Australia especially after rain, but they are over-wintering in  Melbourne. Question is why? The small wetland was fenced-off from dogs/humans etc but was full of pacific black ducks and hard-heads. Guesstimate; 1000

How can so many birds find enough forage in such a small an area, is it because things are even more difficult inland? Is this species over-abundant outside the city. Or are city environments attractive in some way? 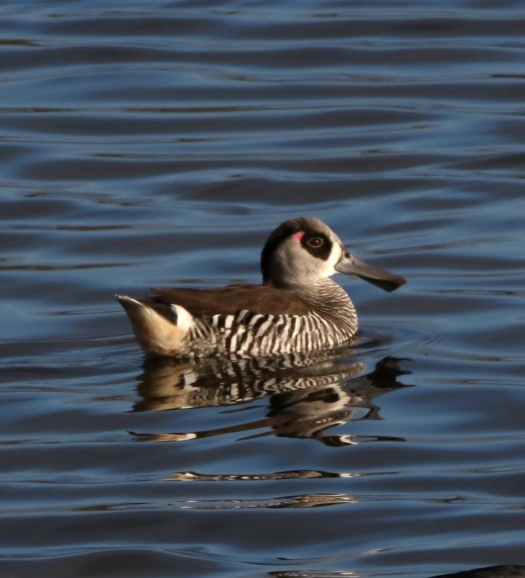 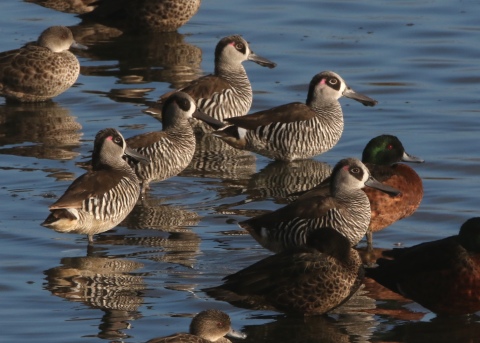 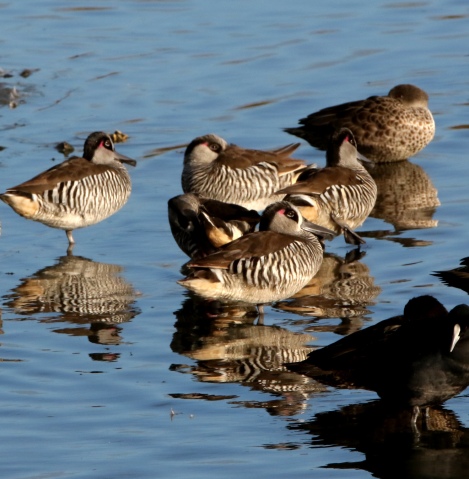