This artwork studies the burrowing bettong, a mainly fungus eating omnivore which prior to colonization lived over much of southern and western Australia. 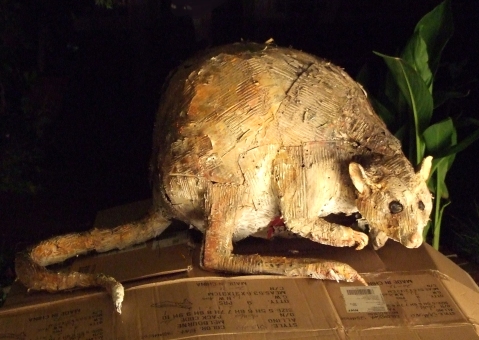 Please persist with clip below, these animals are nocturnal and difficult to capture on video;

The arid inland of Australia appears the last place on earth where subterranean fungi could be found, but these animals spend much of their time digging conical-shaped holes and sniffing out these edible delicacies. In fact scientists have found that between 50 and 90% of the diet is fungi. Roots, tubers, seeds, fruits, leaves and invertebrates make up the balance. I was surprised to find that these animals add protein by eating “meat”, maybe in evolutionary terms they could be placed at the intersection of  the larger herbivores and bandicoots.  Each animal moves tons of earth each year thereby aerating the soil, trapping seeds and litter and allowing run-off to run into the earth. They are our arid lands little farmers.

I also heard from sanctuary ground staff that these bettongs are sometimes seen in lower tree branches, so maybe one could assume they have some vestige tree-kangaroo attributes.

Burrowing bettongs dig burrows which interlink and where they stay during daylight hours providing protection against the hottest days. Hundreds of animals could inhabit the same warren. I have an artist friend who works with archaeologists at Lake Mungo and who describes evidence of ancient huge circular warrens.  It seems burrowing bettongs have been here quite a while.

With the advent of sheep and rabbits, bettongs were robbed of their habitat and the european rabbit found a ready home. So currently this little animal is now extinct in the wild on the mainland and can be seen only behind feral proof fences. 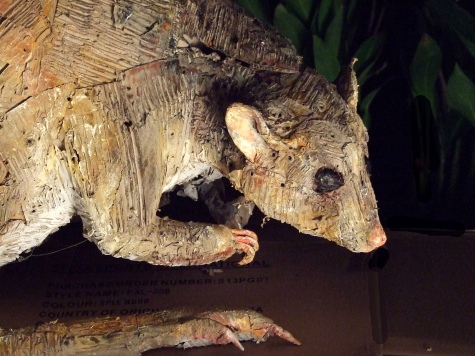 Introduced predators present a formidable hazard to this species. Hopefully one day we will learn how to reduce cats and fox populations and see these charming creatures return to suitable habitat and national parks. In boom-bust Australia arid bettongs are in their element, given the right conditions they re-populate quickly.

Photo by me taken at Scotia, AWC, western NSW winter 2013